1905: The City of Los Angeles begins buying up ranchland and associated water rights in the Owens Valley.

1913: The L.A. Aqueduct is completed, at which point Eastern Sierra water begins its nearly 300-mile journey south to the growing city.

1924: Owens Lake is dried up as a result of diversions from the Owens River to the L.A. Aqueduct.

1938-1944: Land swaps finalized in which Native Americans give up their holdings in return for LADWP-owned land near Bishop, Big Pine and Lone Pine without water rights – albeit with guaranteed water supply from LADWP.

1941: LADWP completes construction of tunnel to begin water diversions from Mono Basin. Construction of Long Valley Dam is completed; Crowley Lake begins to fill behind it.

In the early 1960s, when plans were drawn up for adding a second barrel to the Aqueduct, LADWP officials decided that ranch leases should be maintained, despite the fact that there would be enough capacity to export nearly all of that water which had previously been considered “surplus.” Aqueduct manager Bob Phillips recommended maintaining the existing 216,000 acres of ranch leases to “sustain the type and the extent of control we have had in the past” (Phillips 1963, 8). He explained that, in addition to earning the department about $290,000 in yearly revenue, leasing ranch lands “forestalls use of that land for purposes contrary to our interests” all while keeping the land in “virtually a virgin state” with “minimal” water usage that was  “consistent with our purposes and is still a reasonable use” (8). Because of the important benefits it had for the local economy, he also saw this as something that could appease local residents amid growing concerns about the construction of the second barrel. 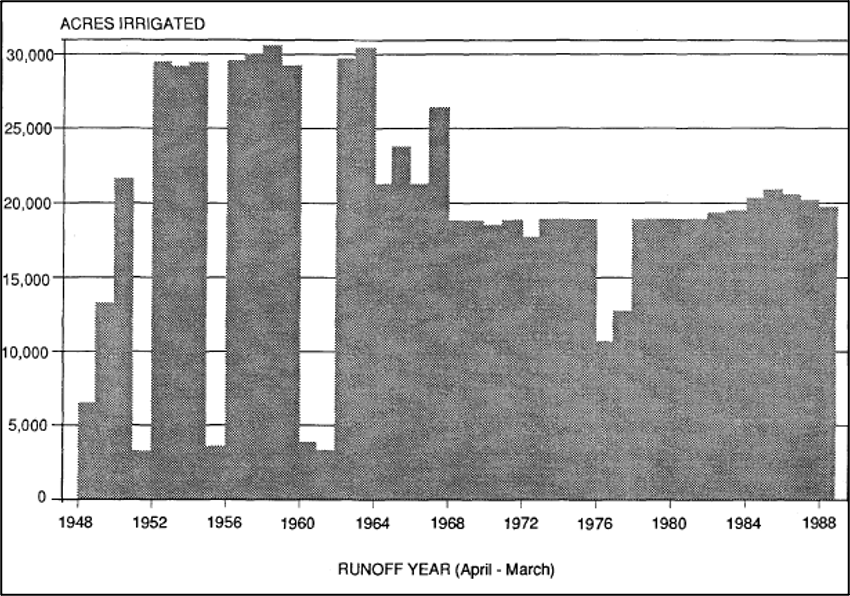 By 1967, LADWP had taken 29,000 acres out of production, but pledged to sustain the remaining 187,000 acres “in the same status for the indefinite future” and to provide irrigation “on a more firm basis” (Georgesen 1967, 2). Between 1963 and 1970, LADWP cut the amount of irrigated acreage in Owens Valley from about 21,800 acres to about 11,600 acres with a promise to provide a steadier allotment of water, as opposed to the “feast or famine” approach of the past (Los Angeles and Inyo County 1990, 96). This shift can be seen in Figure 56, which shows irrigated acreage in Inyo and Mono counties supplied by LADWP between 1948 and 1988. One ranch lessee recalled this change: “They built the second aqueduct and then they really started to dry up a lot of irrigation land that was left. […] Bob [Phillips] just basically took a map and he took a red marker and he marked a bunch of it red and a bunch of it green and the stuff that was red was going to get dried out.” (Interview 7/24/2017)

1994: After years of litigation, the State Water Resources Control Board issues Decision 1631, setting a higher required level of water for Mono Lake, which had been depleted for decades by LADWP. It also mandated permanent flows for Mono Basin streams, and ordered LADWP to restore streams and waterfowl habitat damaged as a result of diversions.

2013-Present: LADWP leases to ranchers in Long Valley and Little Round Valley operate on holdover status.

2014: LADWP approves a Conservation Strategy for the Bi-State Sage Grouse and enters into a memorandum of understanding with the U.S. Fish and Wildlife Service on its implementation, but these are both non-binding documents.

2015: At the height of a multi-year drought, LADWP provides no water to the Long Valley and Little Round Valley lessees for the first time.

2018: LADWP informs the Long Valley and Little Round Valley lessee ranchers that it intends to renew their holdover leases without any irrigation water supply. The Keep Long Valley Green coalition forms in opposition. Mono County and the Sierra Club file a lawsuit against LADWP’s proposal, arguing that the agency must first conduct a CEQA environmental review before such a drastic change from historical practice. An interim court order compels LADWP to continue providing historical volumes of water to the lessees while the case is being litigated.

2020: LADWP unveils an Adaptive Management Plan for the Bi-State Sage Grouse, but like its previous Conservation Strategy, it is not legally binding.

Dive in: History, coalition goals, and impact of water on the Long Valley

Follow the timeline of LA’s actions in the Eastern Sierra from 1905 to the current day. From undercover representatives consolidating water rights,  to destruction of the the original meadows, and recent attempts to dewater the entire valley…

Our overriding goal is simple: for LADWP to provide a binding yearly water supply (adjusted for precipitation) for Long Valley and Little Round Valley, at a certain date each year…

Phillips, Robert. 1963. Availability and Utilization of Inyo-Mono Water. Vol. 6 of a report on the feasibility of a Second Barrel to the Los Angeles Aqueduct. Department of Water and Power, City of Los Angeles. [From personal collection of a rancher].